Joined Nov 28, 2012
·
3,495 Posts
A friend offered to sell me a Marlin lever action he inherited some years ago. I haven't seen it yet just some pics. He says it has no marking for caliber but he was told it was .32 Winchester. I spent some time on the sales sites and it appears identical to a model 1895. The serial number is visible and starts with E21, which according to one chart he found makes it a 1948 manufacture. I haven't been able to find out if they made more than one .32 caliber that year or any year, there are several .32 caliber cartridges around and maybe some obsolete ones I don't know about. As for value, I would call it a little closer to rough than fair, but somewhere in between.

Long way around to ask any Marlin gurus to give me some advice on what to look for, or any known problems. I don't think he ever fired it. Probably the biggest question is where to look for model and caliber info on these?

Thanks for any help.


This firearm has the rare distinction of being two separate and different rifles with the same model number. The first Marlin Model 1895 debuted in 1895 and was virtually identical to the company’s 1893 model, except the newer model was scaled up to better handle larger cartridges. The 1893 model was brought about by Lewis Lobdon (L.L.) Hepburn as an improvement over his Model 1889 rifle.

Hepburn was employed by Marlin after his previous employer, Remington, was forced into receivership. He brought with him an excellent reputation both as a competitive marksman and a rifle designer. Hepburn secured some 20 patents during his 30-year career at Marlin.

The Model 1895 was chambered in a variety of large-bore black powder cartridges of the day, including the .38-56, .40-65, .40-82 and the .45-70. Later it would also be chambered in .45-90 and .33 Winchester Center Fire (WCF) cartridges. It originally featured a color casehardened receiver, though a blue receiver was available at no extra cost. With a 26" barrel, the overall length of the Model 1895 was 35 1/2". A carbine version with a 22" barrel was available, and in 1897 a 15" barreled model was offered. These featured a saddle ring—Marlin called it a sling ring—on the left side of the receiver. Carbine versions of this early 1895 are very rare. A major distinction of the Marlin rifle over the Winchester was its square-like bolt and side ejection and solid-top receiver. The top tang of the Model 1895 was drilled and tapped for a peep sight. In 1903 Marlin began drilling and tapping the top of the receiver for its Hepburn Receiver Sight. Along in 1912, Marlin produced a lightweight Model 1895 with a thinner barrel chambered in .33 WCF.

For whatever reason, the Model 1895 never really caught on. Just 18,000 rifles were made during its 22-year run. Perhaps the introduction of bolt-action rifles and their high-velocity bottlenecked cartridges overshadowed the Marlin lever-gun. Nonetheless, the Model 1895 was a solidly built and accurate rifle.

Fast forward to the year 1936. Like everyone else, Marlin was struggling to survive The Depression. It brought out a Model 1936 rifle that retained solid-top, side-ejection features debuted by Marlin 53 years earlier. The Model 36—as it became known—retained the square-like bolt of the Model 1889 and 1893 models. However, this set up was expensive to make with several costly machining operations needed to make the rifle. This, of course, was long before the modern machining centers we have today that are computer controlled. At that time, each part had to be moved from one milling operation to the next, taking a lot more time and, thusly, more costly. The Model 36 had a 12-year run and was redesigned into the Model 336 in 1948.

Improvements in the Model 336 include a bolt made from round stock, an improved extractor made from spring steel, a window in the right side of the receiver for ejection and single-cartridge loading and a corresponding round hole in the rear of the receiver to accommodate bolt travel. This left a large piece of the receiver metal at the rear intact, strengthening the receiver, as well as adding a bit of streamlining to it. The Model 336 is an unqualified success, with more than 5 million copies made. It is still with us today. 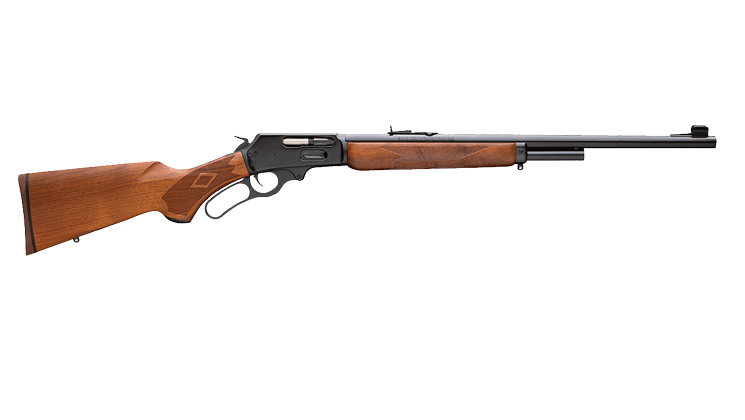 This firearm has the rare distinction of being two separate and different rifles with the same model number.


To reblue or not to reblue, that is the question. 1948 Marlin 336 .32 win special. Internals look great, externals not so much, what is the collective opinion on reblueing?

Joined 10 mo ago
·
2,152 Posts
I'd try to clean that up first. Nice vid below from Brownells.
But, i dont know the value of that firearm. Generally, a reblue will significantly reduce the value. Just something to consider.

Clifffalling said:
I'd try to clean that up first. Nice vid below from Brownells.
But, i dont know the value of that firearm. Generally, a reblue will significantly reduce the value. Just something to consider.

I learned that the hard way a log time ago. My heirs lost a fair amount of value on an old colt because I was young and dumb in about 1984 or 5. But it is by far my favorite revolver, so my heirs lost money, I didn't, I ain't selling it!😊😊 That is a great video, I think the pitting is a little beyond what he is working on, but it is a great place to start. Thanks a lot.

The bore looks perfect, not a mark, action is very tight, I think it was just stored badly, and not shot often.

Thanks for all the replies, and please chime in with anything you think of.

F4U said:
Is that .32 Winchester special?
Click to expand...

Joined Nov 28, 2012
·
3,495 Posts
Cleaned up pretty good, thanks for the help. Two more questions, what is the best way to clean up this sling? I am thinking some saddle soap or neatsfoot oil, and the wood is in good shape but dull, Murphy's Oil Soap maybe?

Joined Feb 4, 2008
·
26,683 Posts
Saddle soap, Neatsfoot oil. However, there a lot of folks that swear by Ballistol as a CLP for metal wood and leather. Nice rifle.
S